During the  50 years of his working life, he undertook about 1000 commissions around Australia. His first under his own name was in 1957 when, at 26, he designed and made the great west window in Sale Cathedral in East Gippsland, eventually completing 13 ''lights'' there. 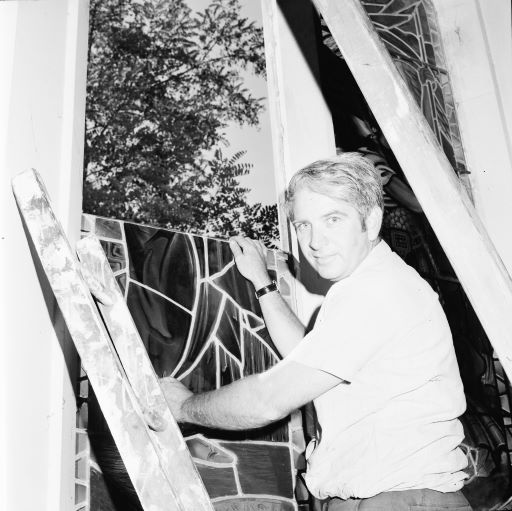 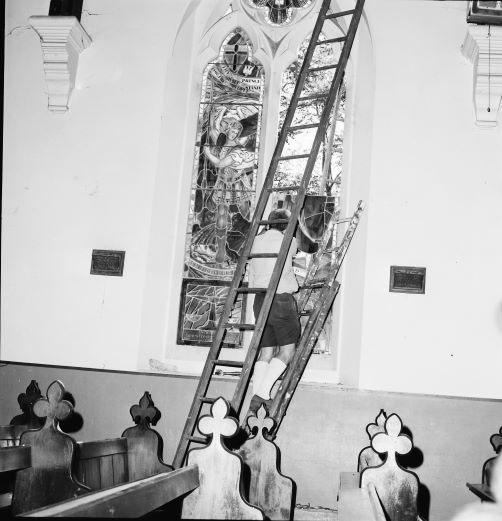 PHILIP HANDEL was one of Australia's few remaining traditional stained-glass artists. His greatest commission was the Windows of Remembrance in the historic stone Church of St Michael and All Angels in Sandakan, Sabah (formerly British North Borneo).

In 2003, on learning that the windows were to honour the almost 2500 Australian and British POWs who died at the infamous Sandakan Camp or on the death marches to Ranau, and to thank the local people who risked and gave their lives to help them, Handel offered to come out of retirement to undertake the work. It was only after he had done so that he learnt the soldier engaged to his much older sister had died at Sandakan.

So began his greatest and most rewarding project, which encompassed the Memorial Windows and two large ''Friendship Windows'', celebrating the bonds forged between Australia and the people of Sabah. Made from many thousands of pieces of antique hand-blown glass, the windows are testimony to courage and endurance, demonstrated not only by the prisoners of war but by Handel himself who, although suffering from terminal cancer, completed stage two of the project in time for the unveiling on Anzac Eve last year.

Philip Handel, who has died aged 78, was the youngest of five children, born in Croydon, Sydney to Alfred Handel, a well-established stained-glass artist, and his wife, Mary.

Best described as ''a master artist who worked in the medium of stained glass'', to distinguish him from those simply skilled in leadlighting, from the time he could pick up a pencil Handel was drawing and, after completing his intermediate certificate at Homebush Boys High School, joined his father in the family business in Elizabeth Street.

When Handel was 17 his father died and, as he had yet to complete a window by himself, many commissions had to be passed to other firms. However, clergy who had been associated with his father gave him some small commissions, which gave him the confidence to continue.

Despite this, the pickings were lean and in 1954 Handel was on the point of giving up when the minister of the Gunnedah Presbyterian church arrived on the doorstep.

Outraged by the rudeness he had experienced at a rival studio, he gave Handel his first large commission: five two-light (panel) windows. Work proceeded at a frantic pace, from 4am until midnight, to meet the deadline for the unveiling. In the meantime, his financial position now secure and with 13 more windows to be completed over the next few years, Handel became engaged to Elizabeth Jeffrey, a kindergarten teacher. They married in 1956.

During the next 50 years of his working life, he undertook about 1000 commissions around Australia. His first under his own name was in 1957 when, at 26, he designed and made the great west window in Sale Cathedral in East Gippsland, eventually completing 15 (13?) ''lights'' there.

Churches with his work are in Dee Why, Hornsby and Seaforth in Sydney, Ainslie in Canberra, Bairnsdale in Victoria and Henley Beach in Adelaide. As well, there are the chapels at Garden Island Naval Base and North Shore Hospital in Sydney and faculty windows at Newcastle University.

How to make a stained glass window, Handel-style  July 18, 2012  By Melanie Pitkin 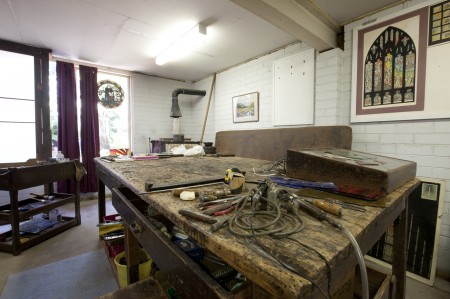 Picture a large stained glass window inside a cathedral. You see a variety of colours – perhaps a contrast of red and blue, long slivers of yellow, or a striking sea of white. A pattern emerges, changing your interpretation of the window. At first you notice a figure in the centre of the window, which you perceive to be the image of Christ. Then more figures emerge, so you begin to piece together a narrative, reading the window as you would a novel. Now you are lost in the story, in the intricacies of light and colour, in private thought and reverie.

As an intern at the Powerhouse Museum, I assisted with the acquisition of historic studio equipment owned by Philip Handel, producer of stained- and painted-glass windows. The contents of the studio, which include a gas-fired kiln, laying-out workshop table, easel, traymobile and artistry tools, were used to produce hundreds of public windows in Australia from the late 19th Century up to Philip’s death in 2009. The studio was first used in 1873 by the influential Australian glass manufacturing firm Lyon Cottier & Co. , and upon the firm’s closure, the equipment was gifted to a man who had proved his skill as the chief glass-maker of the company. His name was Alfred Handel.

On the first day of my internship, I came across an image of Alfred Handel’s highly-esteemed ‘rose window’, installed at St Bede’s Drummoyne, Sydney in 1932. As a newcomer to the art of the stained glass window, I found myself in awe of this one – its perfect symmetry of line and colour, the symbolic cross at the heart of the image from which everything else flows, and Alfred’s clever incorporation of Australian wild flowers into the traditional format of the rose window. However, its production was marked by controversy, with the window denounced as ‘too bold’ by the architect responsible for installation, Emil Sodersten (see footnote 1). But others saw Alfred’s boldness as creative brilliance, as seen in a tribute written by another architect, Mr. N. W. McPherson:

Mr. Handel had that rare quality of spiritual insight. He knew the bible from end to end. He understood the characters depicted. He felt, within himself the meaning of the subjects he portrayed. That is why his work has that elusive, almost intangible quality which can kindle the emotions of the beholder until he feels as Mr. Handel felt when he designed it. (see footnote 2) 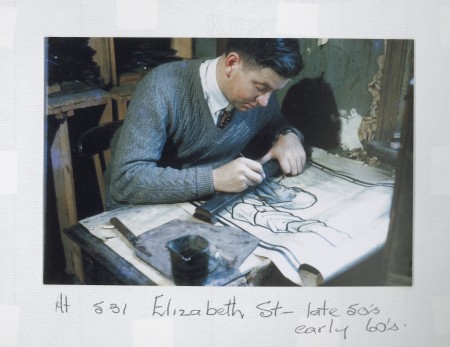 Philip Handel was only seventeen years old when he inherited Alfred C Handel Studios. But the skills he had acquired in two years of working with his father, combined with a spiritual enthusiasm comparable to Alfred’s, set him up for a long and successful career of stained- and painted-glass window production. Philip’s designs were often bolder than those produced by his father, challenging conventions of the stained glass window through contemporary motifs, abstract geometry, and references to social and political histories at the site of installation. One of my favourite Philip Handel windows is the ‘Christ in Glory’ window at St John’s Anglican Church, Dee Why, Sydney. Occupying the entire south wall of the church, ‘Christ in Glory’ is a tableau of small square windows, which combine to create a spectacle of Christ’s grandeur through contrasting colours, lines and symbols. I love how each small window has its own mysteries, which can only be solved by taking two steps back and viewing the window in its entirety. 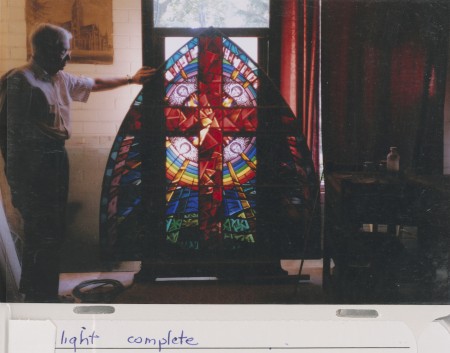 Philip’s wife, Elizabeth Handel, was a witness to the repetition, skill and time needed to produce a window like ‘Christ in Glory’. However, she recalls that the repetitive task of cutting, painting and firing each individual piece of glass was never a burden for Philip, because of his passion and diligence:

Every one of the processes is time-consuming, because you’d probably have to, in some stages, repeat what you’ve done two or three times. But Philip didn’t ever mind doing this. He just loved to design, he loved to paint. He didn’t ever have a drawing lesson, but I think it was just a natural thing that came to him. His life was just one of absolutely loving his work, every minute of it. (see footnote 3)

On one of my internship days, I visited Elizabeth at her home. Over tea and sandwiches, perfectly-arranged, I learnt more about Elizabeth’s involvement in her husband’s work. She is especially proud of his last major contribution, the ‘Windows of Remembrance’, installed at the Church of St Michael and All Angels in Sandakan, Sabah (formerly British North Borneo) in 2003. These windows were created in memory of Australian and British prisoners of war who died at the site in World War II, while honouring the local citizens who risked their lives to help them. Philip’s work proves that a stained glass window can have ongoing significance, not just through aesthetic admiration and religious worship, but also in shaping the collective memory of a community.

At the Powerhouse Museum’s Collection Store at Castle Hill, I touch the tiny nail holes on Philip Handel’s laying-out workshop table. There are thousands of markings on the table top, creating a physical imprint of over a century of stained- and painted-glass manufacturing. I notice the three-tiered traymobile, containing Philip’s personalised scatter of paintbrushes, plastic cups and glass palettes. I find a small cooking pot, marked with steel discolouration and wax residue. In front of me is the gas-fired kiln, time-worn but still operable. And wrapped in protective paper is a leather-bound Bible signed ‘Alfred C Handel’, the spiritual foundation of the creative process. Each object from the Handel studio (even the smallest grain of pigment found in a tin in a corner) is a valuable document of individual method, teaching us about the intricacies of a traditional hand-craft which may one day be lost.

Philip uses only hand-blown antique French glass of the highest quality. He's one of a small handful of Australian artists capable of this kind of work.

Philip actually paints pieces of glass and fires them in the kiln to fuse the paint onto the glass surface.His kiln and workbench were first used in 1873. He inherited both from his father.

Philip  From my cradle I was schooled for stained glass because my father had a business and he was in it for 50 years before I went in to it... I didn't think of anything else. I was always wanting to get in with dad.

Narration Philip left school at 15 to become his father's apprentice.

Philip  I missed out on arts school and things like that because my father died very early after I'd come to be with him, and I was more or less on my own. And so I didn't have any formal training, only from the cradle.

Lynette There's something indefinable about Philip Handel's work. You can pick his work in any church in Australia.You go in and you know that he has done it. And his brilliance shines through because he has great depth to his work visually and spiritually. I think that it's a bit like looking at Michelangelo's pieta. What makes that stand out against other sculptures.

Philip The setting is most important with stained glass. First of all it's an art of light. And the position of the window is most important as to how you paint it. Some positions demand deeper colours than others. If the sunlight's streaming through all the time it can take darker colours.

We are Gippsland Anglicans –Committed in Christ, Connecting in Service, Creative in Spirit.
We are committed to providing a safe environment for all, especially children and vulnerable people.
We acknowledge the traditional owners of the Gunaikurnai Nation upon whose land we tread and pay our respects to Elders past, present and emerging, as well as Elders from other country who live on this Land.